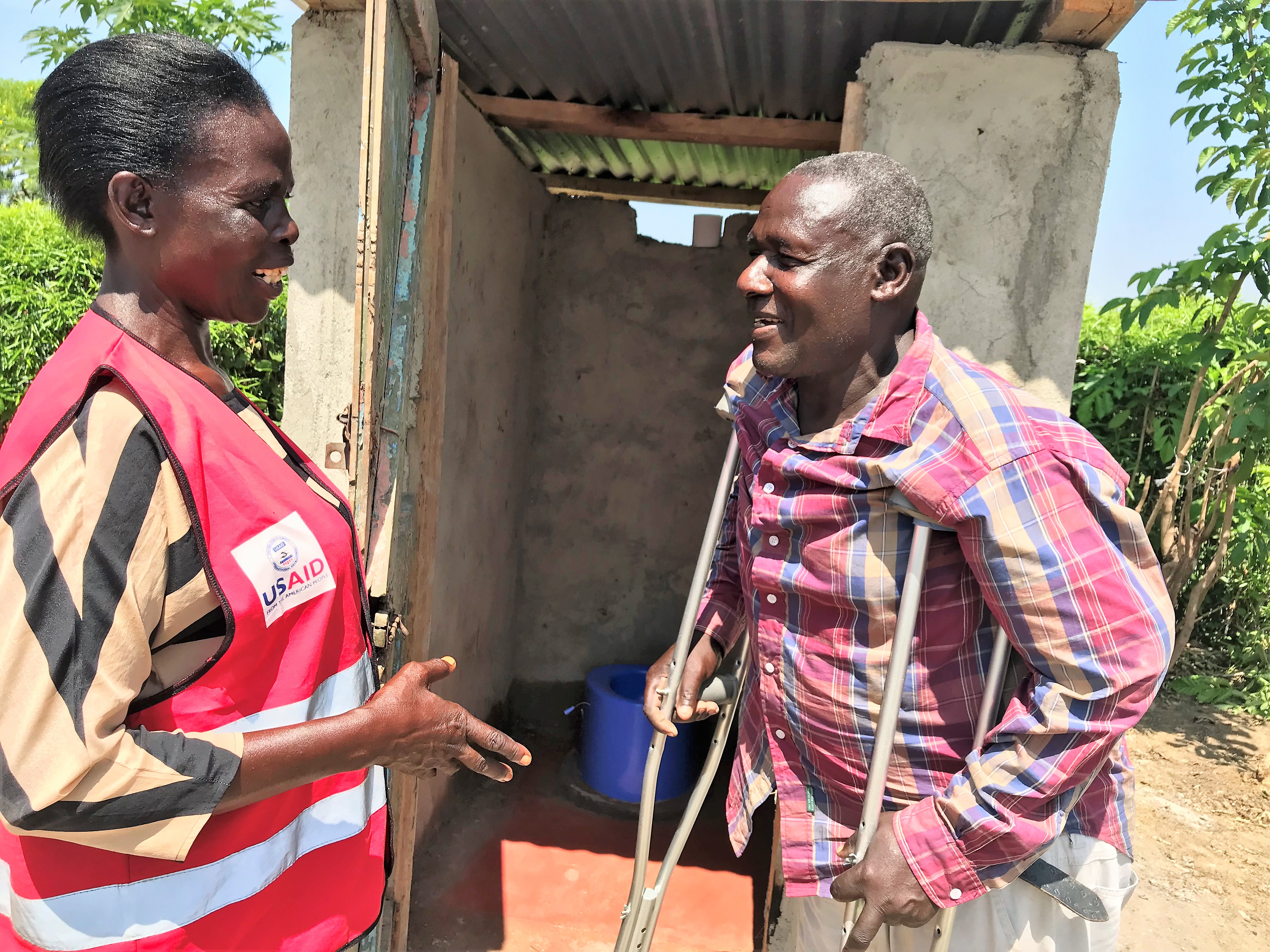 Martin Omorro is 72-year-old and hails from a small rice growing village in Nyando Sub-County, Kisumu County in the Lake Victoria region.  He was a farmer just like many of his neighbors who engaged in rice farming until one fateful morning in 2013 when he was tilling his maize farm and things took a wrong turn. A hippopotamus attacked him. “Things happened so fast, a charged hippo was on the loose and it had spotted me as its target.” Martin remembers precisely. His right leg was severely damaged leaving amputation as the only option.

“After the attack, I had to improvise a way of going to the toilet given my new condition where squatting was totally hindered,” Martin. He ended up getting a plastic chair that he made a hole on the sitting rest and a bucket under it to collect waste. He would later empty the bucket in a latrine and wash it for next usage.  “I had to do all this behind my latrine sometimes under the hot sun and with visitors around. It was very humiliating,” he says.

Martin’s Irrigation 1 Village happened to be one of the areas the Kenya Integrated Water, Sanitation and Hygiene (KIWASH) Project was focusing on. Twenty-five artisans were trained on the construction of SAFI latrine toilets and installation of SATO pan products. The two address a number of challenges hindering access to improved sanitation.

The training also culminated into the completion of a model SAFI latrine at Nyangande Sub-County Hospital. “My wife saw the model at the health facility and she liked it and we decided to have one at our home. We immediately enquired about it from a community health volunteer who linked us to a KIWASH trained artisan,” explains Martin.

The artisan constructed a SAFI latrine which he later fitted with a SATO pan for Martin’s convenience. “I used to see these toilets in health facilities and in rich people’s homesteads, and I never thought it was affordable. Thanks to KIWASH and my wife that my compound also boasts of one.” He says. The elevated SATO pan enables him to sit, clean easily and is more adaptive to topographical conditions.

“The toilet has restored my dignity and comfort when am relieving myself. It was very embarrassing to relieve myself in public especially for an old man of my age. I have small grand children in my compound and the thought of it was just unimaginable. All that is in the past now,” concludes Martin.

or
Please check your e-mail for a link to activate your account.

Wastewater and the spread of COVID-19
For ten years, Caroline, a kale ‘sukuma wiki’ vendor in one of Nairobi’s busiest markets has been receiving healthy-looking kale from her supplier. However Caroline...

Solar energy kept us afloat amidst a pandemic
Since 2016, funding from USAID through the Kenya Integrated Water Sanitation and Hygiene (KIWASH) Project has enabled 231 small and medium water projects to tackle...

A pathway to the sustainable expansion of WASH enterprises
Along the Kisumu-Nairobi highway is the town of Ahero, where two enormous steel water tanks stand side by side by the road. The tanks bear...